I started to write about my ${HOME} directory structure in my post about /home filesystem choices but then it got terribly long and complicated. So I'm writing about it here.

Since switching to a new computer at work I have been reviewing my hodge-podge of directories that I moved from my old work laptop. Same as with my emacs configuration, I like my ${HOME} to be familiar and friendly no matter what computer and operating system I'm using. Also like emacs at the beginning of this year, it's presently a mess. So I'm documenting how I'd like it to look, be that on my home Linux computer, the Windows mode of the same, or on my work's Macintosh.

This long and detailed article is for my own purpose. Others MAY find it frightfully dull and of little value.

Okay, so you're still here despite the warning, and you're probably thinking "Mike, you've been using computers since the 1980s, and Unix systems since the early 1990s, but you're just now blogging about how to organise your home directory! In 2016?! I mean, come on!"

I think, like most people, I invented a very simple structure, almost with no thought, and it kind of grew un-tended over the decades.

Later as I moved from DOS to Unix (wow long names!), to Windows (short names … and then long ones again), then Linux and now also macOS… each environment has added its own pieces to the pie….

So my ${HOME} has an accumulation of crufty files, and weird directories, with no particular place for anything, and files/folders left lying around wherever they were last used.

To get a feel for the state of this mess, take a look at my real-life work bench, which reflects my computer work benches a little too closely: 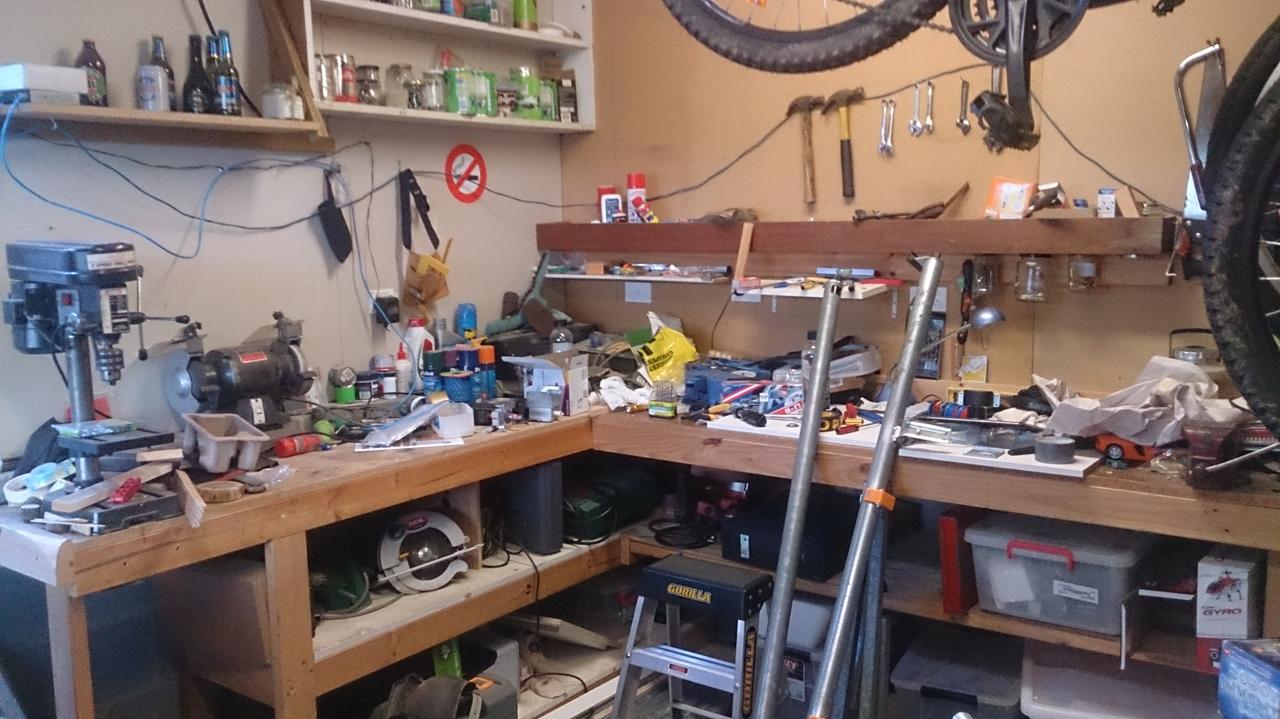 I've put some time on the bus to good use, and cleared up my work laptop's ${HOME} quite a bit. I've also put a bit of thought into what directories to have, and their purpose.

Overview of my Home directory

There are only three kinds of things in my ${HOME}:

I'll describe all these things in a bit, but let's first see how it looks.

My home PC should be almost the same, except the Mac things will be missing, and some of the 3-letter-stubs swap between links and true directories (because of different storage volumes):

Here's how %USERPROFILE% SHOULD look in Windows: (fewer stubs - depending on the Windows version, I use either mklink or junction to make the 3-letter-stubs, and I move OneDrive within Grid if it's present):

Now I'll explore these directories and what they contain, by category.

Directories with Long Names starting with a Capital Letter

These are the familiar ones you see in the Users folders of Windows and macOS, placed there by the makers of the operating system (i.e. by Apple/Microsoft, or by Linux desktop environments that follow similar convention). Interestingly in the case of Linux/X11 desktops, the Free Desktop Project does not prescribe these things. Rather they seem to be a loose convention, although the KDE Documentation mentions where to change the defaults.

The names of these directories all start with a capital letter and are spelled out in full, not abbreviated.

I used to replace these with symlinks, but that's actually a big hassle when you set up a new home directory. Generally it's more trouble to (re)move them than to leave them there, so that's what I'll now do: they are all genuine directories, not links to elsewhere (though they may contain links).

Most modern systems come with half a dozen pre-made directories in their user areas. Here's how I use them:

So many more things added:

Two of the Microsoft standard directories are actually useful to me:

But in practice I do dump files quite a bit. So I should have obvious places for files that are more general, or not part of some project.

The distinction between Audio and Music; or Video and Movies deserves some clarification. My Audio/Video directories are intended for files that are not a song or a movie. In general, songs and movies don't belong in my ${HOME} anyway: they should be in a shared library location.

Locally stored files synchronised on the Grid ("to the Cloud"… ugh). Each may, or may not, be present, depending on the computer or the operating system. I put them all within ${HOME}/Grid:

While I use many services, only one is my main grid volume, and that is pointed to by the ${HOME}/net stub

These are short-named directories that are quick to type and more friendly to my geek sensibilities. They come from the days of old, when 8.3 letter filenames were the limit. Some are inspired by Unix, others are my own invention. They are all well-worn, familiar little pebbles in my life now….

The following stubs go to other devices on the system:

It'd be realy nice if there was such a thing as ~/etc for personal settings, but alas there is not. On Linux $XDG_CONFIG_HOME=${HOME}/.config, already, plus not all programs use this variable anyway, they just stuff their things into ${HOME}/.whatever. I could configure and move stuff, but it's more hassle than it's worth. What I am thinking of doing though, is to place dotfile collections that I have in version control into an etc stub, then linking from there back to ${HOME}. I'm still considering this….

There are also stubs used as short names for the long-named directories:

I have noticed that this mixture of old-world names in my ${HOME} with the new-world ones is nicely mirrored in Apple's arrangement of the root directory of macOS:

So I feel that I'm in good company with my new design.

"Where's that Work Document about my expense claims?". Well, it should be under Work/Documents, but it's reasonable that I might also look in Documents/work, so … "Why Not Both?"

These links line up so that you can find the same place by either path (the target of the link is where the files really belong):

For work, things are a little more intricate (but any of these locations in the chain is equivalent):

And that, I belive, is how things should stay now. Well, for another decade or so anyway… ;-)

The next thing to do is write some bash/powershell scripts to build a fresh home on new computers, using this blog post as a specification.