For decades, my favorite place to write has been in the venerable text editor / programmer's environment EMACS. It's a superb LISP environment, with a long history, is fantastically hackable, and has a mode for nearly everything.

But for the past three years, I've abandoned it for a new friend, from a most unlikely source: Microsoft's Visual Studio Code. You know, the Flight Simulator company ;-)

This is a big change for me. Why after all of this time have I done this? The simple answer is: it Just Works. It's EMACS' spiritual successor in many ways.

We computer hackers get attached to our tools, much like carpenters. It takes some convincing to make one check out a new tool, when the old faithful is so comfortable in the hand. What made me pick up Visual Studio Code in the first place, when I'm so happy with EMACS?

Visual Studio Code takes the best ideas of EMACS, and puts them into a modern text editor:

The name Visual Studio Code is a mouthful, and also the Visual Studio part is pretty much just a marketing stance: it's not very much like Microsoft Visual Studio really, any more than Sun Java Desktop System was like Java. It's more like Sublime Text, or Atom, whereas Visual Studio is a full IDE, like JetBrains, or NetBeans. So let's just call it Code, or VS Code.

It's just so gorgeous to look at 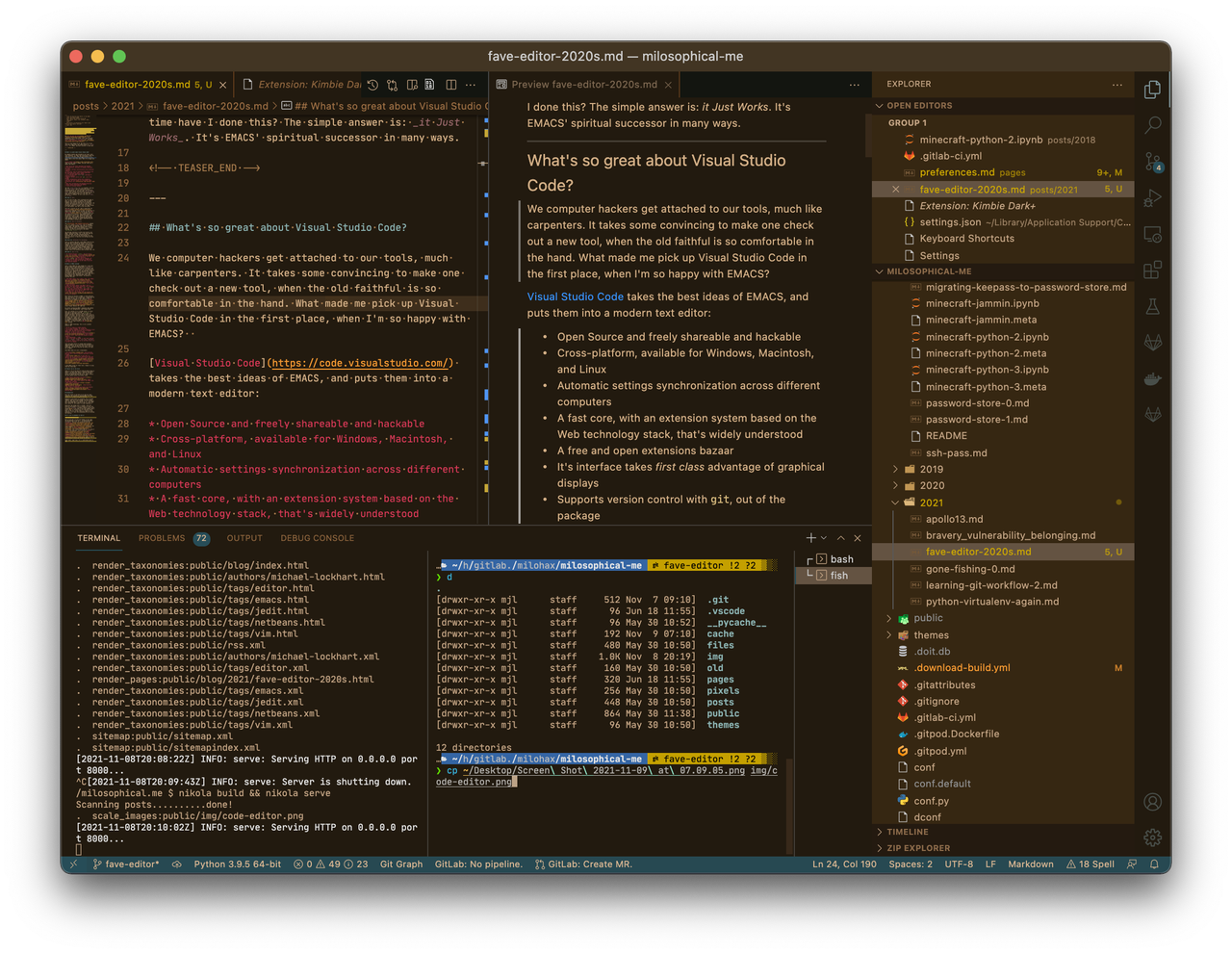 Here we see that I've put the Sidebar on the right, and the Minimap on the left (à la Athena/Smalltalk scrollbars). The icons are customized with the vscode-icons and file-icons extensions. The colour theme is Kimbie Dark+ (to match my blog's colours), but I often switch them up. I'm using it to edit this blog post. You'll notice a couple of GitLab extensions, and the Docker extension makes it easy to launch Nikola to build and review the post.

You can start up Code, fully configured and ready to edit, in just a few seconds, even on modest hardware. If Code is already running then using the code command from a shell will cause it to just open a new window (like emacsclient).

The terminal emulator has an optimised renderer which will use your GPU and can spit out thousands of lines per second. Many extensions require a "reload" (akin to a page refresh on a web browser), but this is also very quick.

That Code is so zippy was a surprise for me. Code is based upon the Electron application framework. Prior to Code, my experience in using a text editor based on Electron was the Atom text editor (a hackable editor for the twenty-first century). Atom showed promise, but was painfully slow to use. Somehow Microsoft have solved this issue in Code, and it can handle very large files, intelligently disabling some features like language services, or syntax highlighting when files get above a certain size.

Code is Easy to Customize

The Preferences: Open Keyboard Shortcuts command (C-K C-S) gives a searchable list of commands, their current key bindings, when they are in effect (which mode), and where the binding comes from (a default setting, part of an extension, or a custom setting). So this is essentially like EMACS' describe-key (C-h k ...).

The Settings interface is pretty much exactly like EMACS' interactive menus, too. I like that Code has global settings, and then workspace-specific overrides. You can also view the settings file and edit it directly, or show only the settings you have modified.

There are Extensions for everything

There is nothing Code does, which EMACS cannot do too, but Code does it without one having to do a lot of research, and without making complex configuration changes in code to install modules: just a few mouse clicks and you can add Python language support with full virtual environment support, Intellisense, and interactive debugging. Want to do it remotely? No dramas, there is an extension which provides that, too.

Code is Easy to Use

Where is EMACS lacking?

Code is where EMACS has been headed for a long time, but was unable to pass through Zeno's dichotomy paradox to reach mainstream levels of usability. Why should this matter to me, after all I've spent years tweaking it to my liking? Well it's because even after all this work, EMACS is still operated like a 1980s LISP Machine, and not like the rest of my computers. As awesome as that environment is, it does mean that I must switch my own "operating mode" when I pass between EMACS, and a web browser. The options to overcome this are:

Many things are possible in EMACS, in many different ways, but there is not an agreed way. I understand the philosophy of this, but it does make it harder to learn how to use EMACS to (for instance): manage Vagrant, or Docker, or to build Java code, or to access things remotely the right way.

Be careful customizing EMACS: frequently when adding things to the configuration, other things break.

Also if you want to see where else EMACS is lacking, try running it on a non-GNU system. It relies upon many of the tools from GNU core-utils. I switched to Apple Macintosh in 2016 (a topic for another blog post!) and while you can make it work on macOS: it's slower, and less stable. It was getting to the point that I didn't trust EMACS not to crash on me in the middle of a remote edit. It's not really practical to run EMACS in Windows except in WSL2. Back in the mid-2000s I tried using Cygwin, but that was just torturous, so I had a stint in jEdit instead.

EMACS is 1980s technology. This is not a problem usually, but:

There have been efforts to change these problems, updating EMACS to run on Guile and use the GTK for a widget set. After 20 years we still aren't there yet with Guile instead of eLisp, and GTK widgets are fine but not pretty (at least not in EMACS).

Some EMACS modes are still irreplaceable

I keep EMACS around for these tools, though I'm using them less these days.

The popular kid on the block

There is a lot to be said for using an editor which is popular. It means that there's a healthy improvement cycle, a big extensions bazaar, and a lot of tips online for making the most out of it. Code is easily the most popular editor environment today:

Does this matter to me? Much of my time was spent (joyfully, but wastefully) hacking EMACS Lisp codes because it's so easy to explore online.

The keyboard is much easier to customize, and is already "modern" right out of the package. This has always been the main thing that I wanted to "fix" with EMACS, ever since the 1990s when I started to use it. I got some ways towards it, but always I've been fighting it.

Exploring "how things work" is harder in Code, since the Electron environment is not as dynamic as eLisp. But it's still possible. It doesn't matter to me as much though — I just need to know what happens when I press a key, or to bind a key to a function, which Code can tell me. If ever there is a need for a new extension, I'll learn the programming API by following the tutorial.

Super sweet, super easy, Code is a comfortable place to be.