A summary of the steps to install Minecraft with Forge, the two Forge mods "Raspberry Jam Mod" and "PythonTool Mod" and configure the coding environment to my preferred arrangement. I am using this on my own computers (work's Mac, and my openSUSE PCs) as well as my son's Windows 10 PC.

(You may be wondering why I'm recommending VS Code over Spacemacs — Code is a whole heck easier to install and set up on Windows, and it's not half bad as a go-to editor anyway, especially for kids.)

Detailed instructions for setting all of this up in Windows or Mac are pretty well covered by either the Raspberry Jam instructable, or the PythonTool instructions.

Here is how I've installed on the base requirements

You could of course combine all of those install steps into one long one….

You can visit web sites and use installer images. For instance Microsoft's Code instructions for Mac. I prefer to use Homebrew to install the requirements though:

You can now reach the Minecraft Profiles quickly and easily. This is where Minecraft's game settings and Worlds are kept. It's also where we install the mod's, so for brevity, since the instructions from here on are the same for each OS, I'll call this location $MCPROFILE. You can substitute that for "~/fun/minecraft" or one of the locations above for your operating system.

Fire up your shiny new editor and edit the Minecraft options file, $MCPROFILE/options.txt. You want to search for the option to pause when the game loses focus, and turn that OFF (so that your Minecraft continues to play when you're using your editor, like Minecraft Pi edition does). In Code you can press Control-F to find (Command-F on a Mac) and enter "pause", that should find it. Change the line to look like this:

and then Save the file (Control-S or Command-S). Next time you start Minecraft it'll behave like the Pi edition.

Since I'm using PythonTool Mod, then the install instructions for that are the most appropriate to follow. This also installs Forge and Raspberry Jam.

This is enough to get you going either with the instructions from PythonTool or the Raspberry Jam instructable (from after its steps on installing all the prerequisits).

Now is a good time to start Minecraft with your forge profile and confirm that it's working, and that Raspberry Jam and PythonTool both function properly.

If it all has gone well, you're good to continue.

I like to have a separate folder for my own Minecraft Python scripts. Then I can copy in examples from the python-scripts.zip file one at a time, add them to source control such as git, and make changes, tracking what I did. PythonTool supports this, which is the main reason why I want to use it.

First, create a folder for your hacks. I keep mine in ~/hax/minecraft:

Now copy in a script from python-scripts. Let's use Zhouwei's rainbow again:

And now configure PythonTool Mod to refer to this directory for scripts. In the Mod Lists screen, click on PythonTool Mod and then press the Config button: 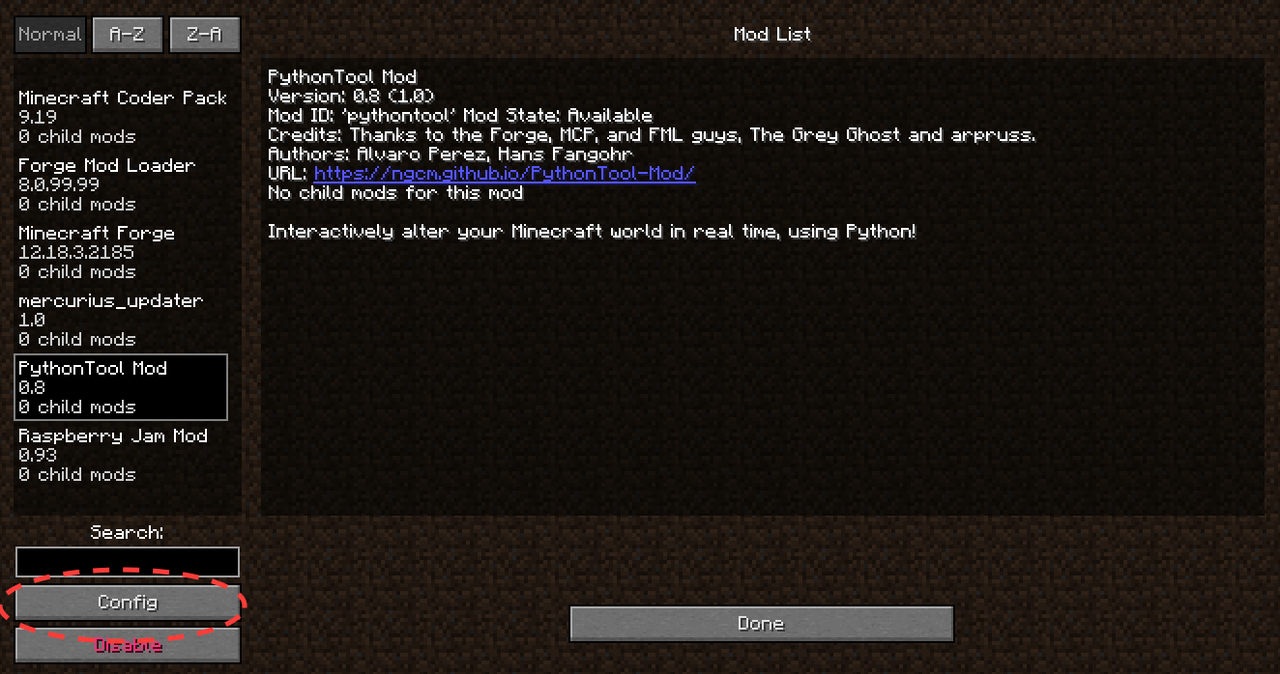 You want to change the Script Path Configuration and set the Script Folder to be the folder you just made with the single script in it: 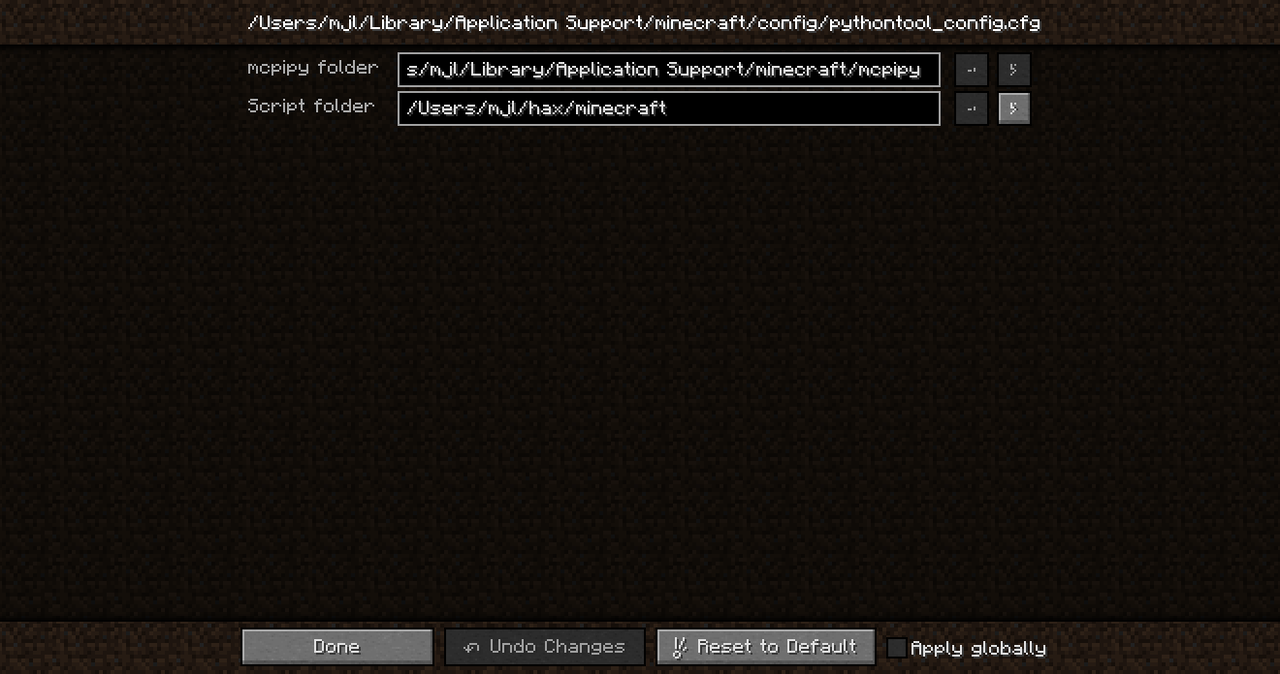 We're ready to hack! But while we're here I like to set up a Python environment too. We'll get back to this later on. I'm using My Python virtualenv scripts here:

(which reminds me: I should blog about those…)