I've already blogged about Python 3 and Minecraft, but there are some subtle things which I glossed over in that post. I found when following my own notes that some of the steps are easy to skim over. I could explain a bit better what is going on, and why I was seeing weird errors when I resurrected my environment to work on an experiment with my kids.

I deferred to the instructions by the Module author in my earlier post, and augmented those with the PythonTools instructions. These are correct and they work if you follow them, but in my own setup on a work computer, they need tweaking a little, and that requires understanding what's actually going on. Here are the main points:

1. Use the newest Minecraft version supported by your modules.

Anything newer may work, but it won't support the newer Minecraft features, such as all the block types in Acquatic (1.13).

The Minecraft Launcher lets you create Installations and use older Minecraft releases. May as well stick with what's supported by these modules.

2. Use a separate Game Directory

When creating a new Installation, specify a separate Game directory. There are two benefits:

Create the new Installation, install a matching version of Forge for Minecraft 1.12.2 (or for 1.10.2) and then run the game once to set up the directories you need. You can make a World now too, if you want to.

3. The Raspberry Jam mods.zip goes it the Game Directory

Once I had a Game Directory, I unziped mods.zip from Raspberry Jam Mod into the /mods sub directory. This provides the Java classes to implement the Minecraft side of the Minecraft Pi API.

4. The mcpypi Python Library goes in the Game Directory too

The MCPI library must be located in /mcpypi/mcpi in the Game Directory so that the /py and /lpy Talk Commands can find it, to work in-game. For PythonTool you can change it's options for the Command Block, as I described before.

But here's the kicker: you must use the version of the mcpi code that ARPruss converted to Python 3. Python 2 mcpi code from Stuff About Code won't load properly with Python 3. When I tried, I got his error:

At first I thought it was an issue with my Python environment, and I made some changes to force mcpi into my Python Path. This turned out to be not the case: this is a symptom that the moule isn't initialising properly (this was changed between Python 2 and Python 3). Even after I fixed that, the module imports, but I instead see this error:

Which indicates that the code is broken in Python 3 and it'll need a lot of work to get going.

Fortunately, the code that comes in python-scripts.zip from Raspberry Jam Mod already has these fixes, so just use the more modern code. I forked ARPruss's module to be sure I know which one to get in future.

By default, the Module will use the system Python, which is likely to be Python 2.7 still. This works (because ARPruss is awesome and made his version of the code work for both Pythons), but it will be less confusing to use 3, also since Python 2 is now end-of-life at last, it is better to stop relying on it.

I changed the Module's Options to specify the executable for Python 3: 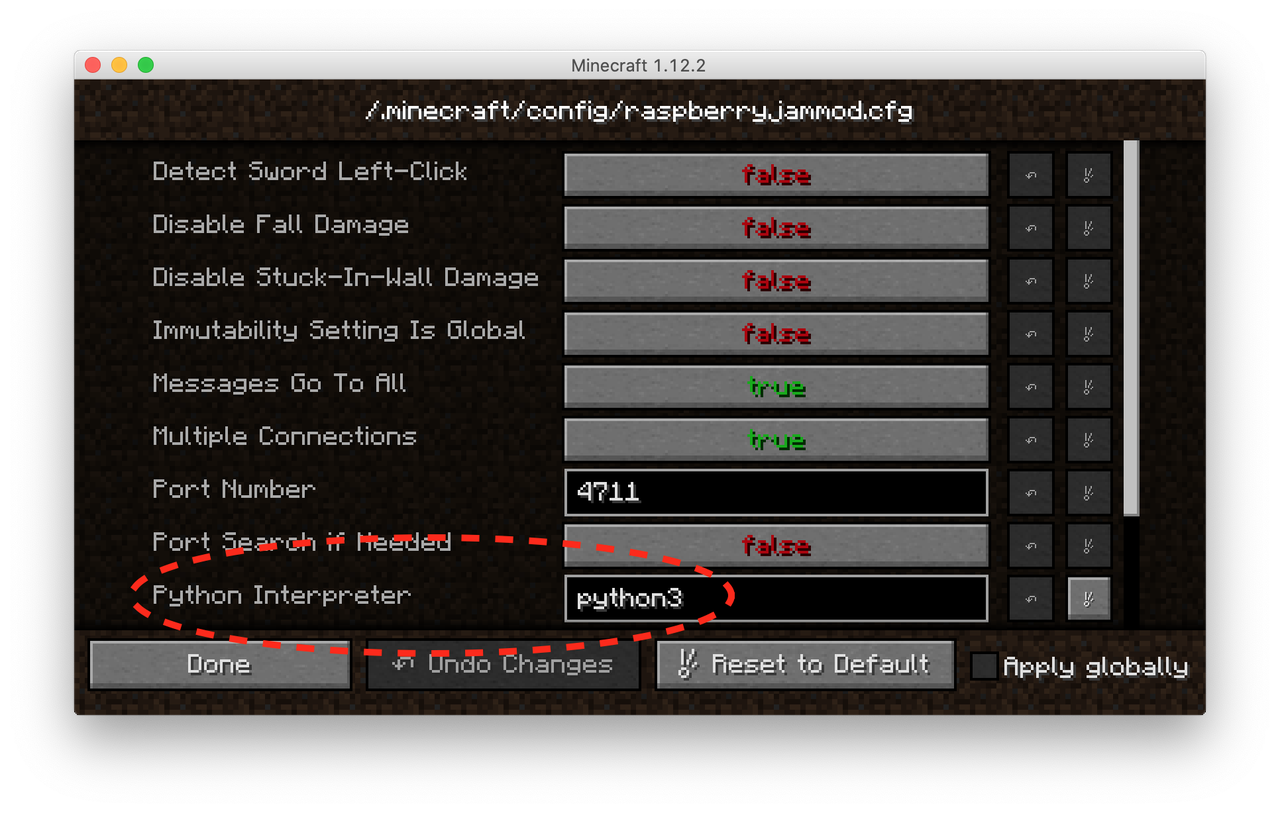 (I could also edit $MCPROFILE/config/raspberryjammod.cfg):

This assumes that the python3 command will work, which it does for me, at least for now. I may need to set up Python 3 to "just work" on other operating systems, or put the full path to a python3 executable as the Python Interpreter Option value.

6. Install Raspberry Jam Mod from PyPI into your Virtual Environment

This makes the mcpi module available to code in whichever Python environment used to do Minecraft hacking. I don't need to copy the mcpi from python-scripts.zip into my own code after doing this. I am now also sure that I'm using the right python code for Python 3.